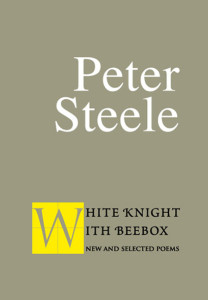 This collection begins with 82 pages of new poems, then follows back through a rich selection from Peter Steele’s earlier books. Two volumes of poems on artworks are represented by ones that retain their power separately from illustration. He is a respected poet mainly by repute and glimpses: this gathering shows one of our best, in skill and scope.

A worker in traditional forms, he early on perfected his own stress metre, unrhymed and alternating five and four beats — a flexible and driving rhythm for wit and sustained, passionate thinking in the classical tradition of the ode.

The effortless range of historical detail is liberating. It plays to our curiosity with references swept in quickly and lightly, turning to precise image as they arrive. Steele has written of poetry’s need for ‘finger-tip control . . . it is always delicacy that delivers the goods’.

Just as striking is the emotional range, dark to light. The new sequence ‘A Mass for Anglesea’, framed after that ceremony, is a kind of essay, variously lyrical and mordant, in the modes and tones of joy and grief. Steele’s poems, constantly energetic, open as constantly to stillness.

White Knight with Beebox: New and Selected Poems was shortlisted for the 2009 Judith Wright Poetry Prize in the A.C.T Awards.

Here is a selection of poems from White Knight with Beebox: New and Selected Poems.