the sonnet according to ‘m’: Jordie Albiston 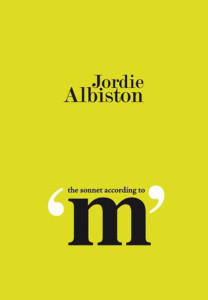 The letter ‘m’ is emblematic of recurrence and precipitousness in these poems. They emerge with the wantonness of sensations in everyday life. In this case three lives: maternal grandmother, paternal great-great grandmother and the poet. Jordie Albiston, with characteristic delicacy and zest, limns these very different women as perspectives to each other.

Recurrence is intrinsic to sonnets. They are patterned internally, and are often paroxysmal: a perfect form and formation for poems which worry the distinction between the fatal and the banal.

The sequence tells what happens when you admit the existential into everyday life, in small or large doses. The results can be desolate, or sublime. And comedic as well: Albiston knows how to play between darkness and send-up, when it comes to an arduous and animating tension between body and mind.

The sonnet according to ‘m’ was awarded the 2010 Kenneth Slessor Prize in the NSW Premier’s Literary Awards.  It was also shortlisted for the 2010 Judith Wright Poetry Prize in the A.C.T Awards.

Here is a selection of poems from the sonnet according to ‘m’.

Reviews: the sonnet according to ‘m’.