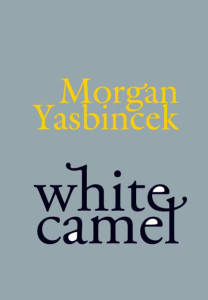 This third book is a radical departure in Morgan Yasbincek’s poetry. A concentrated dialogue with the world around her, displayed in her first two books, gives way to poems that suggest aftermath and new beginning.

Their contemplations occur in the spaces left after loss, where love and grief are ‘kinds of home without settlement’. They summon up the pluck and rapture of childhood, and the wisdom of religions: Buddhist, Hindu, Judeo-Christian, and a resilient and matriarchial animism.

The movement of voice here seems to rely on vacuum and echo for its definitions. The poems refract a spectrum of meanings, from inward directness, to inventive allegory. In the key poem ‘gimel’, the undulating gait of the white camel ‘makes this direction into a future’. Yasbincek’s own rhythms, as ever, are assured and light-syllabled.

White Camel was shortlisted for the 2010 Kenneth Slessor Prize in the NSW Premier’s Literary Awards.

Here is a selection of poems from White Camel.