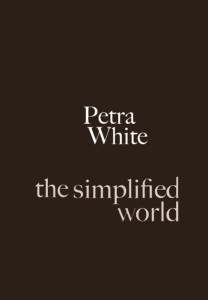 Like Petra White’s applauded first collection, her second begins and ends with a fable of the uncanny ordinary. Between is a cornucopia of odes: epistolary, philosophical, elegiac. These poems think through and honour the normal mysteries of fate.

Her world is large and contemporary, anchored by a young poet’s own memories. White inhabits her poems lightly, using personal experience with wit and without self-pleading. Some of this work shows the shadow of depression: not so much expressing moods as touching on how depression dwells, finding its register so it can speak.

A number of poems openly engage with notable depressives of literary history, but we don’t need those homages to realise that this poet is a very capacious reader. It is there in her music. Late Lowell and Bishop, along with Harwood, ghost the swift edge in her language. Beyond these, a large tradition of cadences and tropes is absorbed in her fluent free verse lines.

The Simplified World was awarded the 2010 Grace Leven Prize, along with LK Holt’s Patience, Mutiny and David Musgrave’s Phantom Limb. It was also shortlisted for the 2011 Judith Wright Prize in the A.C.T Awards and for the John Bray Prize in the 2011 Adelaide Festival Awards for Literature.

Here is a selection of poems from The Simplified World.