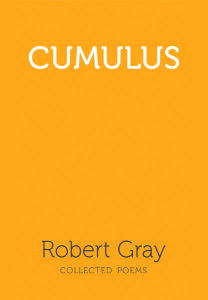 This book is a landmark in Australian poetry. For Cumulus, Robert Gray has chosen all he wishes to retain from his eight volumes of poetry, some of it considerably and significantly revised. He has included here a new book, ‘Nameless Earth’, not previously published in Australia.

Gray has been a daring and original experimenter in the free verse line, and also at times with traditional forms. Equally, his work is notable for its frequent, uncanny rightness in the creation of images. His thinking shows a remarkable fluency in both Eastern and Western philosophies (Gray has referred to himself as a Buddhist heretic). These are all modernist pathways, and this poetry negotiates them with a lucid, classical temper.

Most striking is an ever-alert immediacy—a perception and reflectiveness in the fluid moment. Whether through his sensuous language or his powerful engagement with ideas, Gray’s poetry continually opens us to a fresh involvement with the physical world.