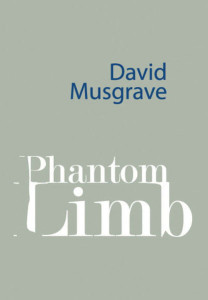 David Musgrave’s poems are at once meditative and restless, elegant and sensual – with an energy of empathy that draws him to a wealth of subjects. They are in several kinds of free verse and formal constraint. Here is wit and melancholy in equal measure, with a dose of joyous satire thrown in.

Waterscapes and landscapes figure strongly. Typically they move from the moment of observation to make transformative connections with emotional and imaginative states: the continual freshness of approach from one to another of these poems is a hallmark.

Other poems meet human situations more immediately. The self, or some other, is substantiated with a generosity of feeling — and this becomes a startling quality within the strands of satire in some poems, notably ‘The Baby Boomers’. Generosity also drives — as much as an elegant form does — ‘Young Montaigne Goes Riding’. Those two extended poems are peaks in a book of exuberant curiosity.

Phantom Limb was awarded the 2010 Grace Leven Prize, along with LK Holt’s Patience, Mutiny and Petra White’s The Simplified World.  It was also shortlisted for the 2011 Western Australian Premier’s Poetry Book Award and for the John Bray Prize in the 2011 Adelaide Festival Awards for Literature.

Here is a selection of poems from Phantom Limb.